All summer long this was shouted to me from the back seat by Little Bee.  She found a game on her tablet that featured some road signs and every time we were in the car at least three or four times per car trip I would hear the most animated shout from the back seat as she noticed such signs out and about.

Curve ahead! We’re curving! she would shout.

Now that it’s been over seven months since my last post (holy crap have I missed writing!), she couldn’t have been more right and I just missed the signs.

Things were just meant to fall into place this Summer. The kids were on Summer break.  Little Bee was set to start 4K in the Fall and Techno  was moving up to high school. Gulp! I was hot on the trail after a victorious finish in my first (and only!) Half-Ironman Triathlon in July. Things were pretty hunky dory.

Then good ole life shook me up a little bit, left some minor bruises and like usual changed me for the better.

Late May standing on the playground to pick up my pre-schooler news broke of my company closing its doors effective July 31st. In disbelief, standing with my daughter’s sweet and sympathetic teacher right there by the tire swings this news launched me into a bumpy ride.

My half Ironman journey ended without closure in July. Storms and torrential rain canceled the swim altogether, delayed the race for over three hours and downgraded the bike portion.  At the end of the day, my friends and I put in one helluva training day but nowhere near what we had trained for the previous six months.

The month rounded out with the loss of my former job, the decision to start a new business and attendance at their annual convention. After being forced out of my comfort zone on a daily basis for the better part of a year anyway, it wasn’t so bad being the new kid again. Resiliency was building and the seeming discomfort was starting to feel more normal.  And another Triathlon was booked. Things had to get back on track.

Late August brought attempt # 2, this time in Minnesota. More rain, more turbulent waves, a course sorely lacking in safety support and in mere minutes it was over.  I was devastated.  While the race was still in progress, Ice and Little Bee and I drove home. It was a very long and emotionally uncomfortable ride.  I was so unsettled and I didn’t know what to do with it.

Still reeling from the curves on my journey I scrambled to sort out my thoughts, plan my next move and try to get a read on how much more of my crazy training, early bed times, 4 am wake-up calls and laundry pile-ups Ice could stomach.

I quietly signed up for my third attempt in Missouri in September. Marketed as one of the most scenic and picturesque triathlons in the country with a bike and run course containing “rolling hills” (Ha! sizable understatement) I put all my hopes on this being my race.  If it wasn’t three times a charm…well I just couldn’t go there.  It had to be.

Almost 12 months ago, I started this long and intense journey. As I sit and type I still marvel at what the power of one’s mind can do.  Twelve months ago I could not swim freestyle more than 75 yards in a pool. And yet my target was over 2100 yards.

Twelve months ago I had ridden on a road bike exactly three times. And yet my goal was to cover 56 miles upright and intact.

Yet, twelve months ago I had the support of my husband, the encouragement of friends and training partners and the mindset that with a lot of guidance and help I would try to figure it out as I went along. There was a reason the training lasted for six months, right?

Well…my training spanned nine months. I finally got “the baby”  on a gorgeous and hot Saturday in September with my sweet husband and my littlest camped out under a tent in Missouri waiting for me to emerge and get on with my life.  The goal that consumed me for so long had been reached. The box was finally, irrevocably checked.

I am now happily missing work outs, consuming way too many Christmas cookies, sleeping in (6:30 is now sleeping in!) and yet looking forward to that first ride when the final snow thaws.

I am forever changed by the curves and challenges of 2016.   The perseverance I truly did not know I had emerged from some mysterious place and served me well. The motivation to do things then that now simply make me cringe (never again Lake Michigan, you can keep your 56 degrees!) But I know it happened. I know it lives somewhere inside of me and I will lean on it when I need to in years to come.

The Fall was busy. I can’t believe it’s been over two months since I’ve been able to get some thoughts down for my blog. After awhile I started to think, will anybody come back to read it anymore? Then a voice said, does it really matter?  This blog is as much a love letter to my kids and something to leave them with as it is a way to ensure my sanity.

And I’m due for some sanity-seeking.

The Fall brought some unique situations. Like finding myself army crawling on my back for a pre-school rescue of Little Bee from a public restroom stall. How lucky for me that my sweet mother was able to capture it real-time for posterity. 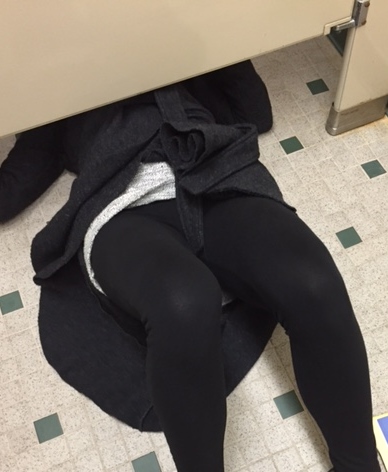 Or finally pulling the trigger on a bucket list item of mine – the Half-Ironman – only to find myself in Physical Therapy for what appears to be a torn rotator cuff and a bum tendon in my leg. Swimming, biking, running? I am able to accomplish one of those three activities right now and training starts next week. Should be a nail biter!

Observing my middle daughter, Twinkle in a tough, minor medical situation ( See No Bubble Wrap Here ) since August has been a life lesson for both of us. She has had to visit the Doctor numerous times since August for a pesky skin condition. Treatments are way uncomfortable and cause her much anxiety and dread. I have watched her face it with new courage and strength. We’ve had scores of pep talks and pump-up sessions and many visits to the coffee shop or favorite fast-food restaurant du jour for post-treatment rewards.

When the tables turned last week and I needed to have something removed from my face and subsequent stitches, she was right there to be my cheerleader with the empathy and compassion of a much older girl. One proud Mama here.

Christmas brought Techno his first cell phone. We have leaped off the ledge into the cyber abyss.  Ice and I are not quite ready for the whole digital world to be at his fingertips. But it’s the first time he has had a bona fide and recurring financial goal to work towards. He’s got the phone plan from us, but he’s now the proud owner of his first “Bill”. Welcome to a taste of adulthood, my son!

The tides have turned a little with Techno and Twinkle. Twinkle is knee-deep in middle school and high school is nearly on the horizon for Techno. The importance of friends in their lives has become paramount. And the memories of that shift in my own life have come flooding back.

I see changes in their language, clothing and interests. Every week they plot which days are best to include activities with friends and plot their course towards maximum fun. What Ice and I have realized is how quickly the hourglass is emptying. The time for all 5 of us under this one roof is fleeting. The maximum fun in each week must include family time and we’re doing our best to make that happen whether they like it or not! It has sure helped that we have all been home together for a holiday break since Christmas Eve. 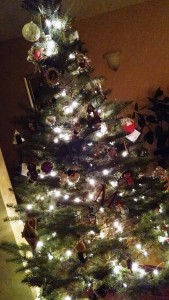 2016 is sure to bring many surprises and ups and downs. Time waits for no one. How blessed are we that we have this moment?