A visit to the gym to workout today proved to be full of some pretty big lessons for my nine-year-old daughter (and me). While on the treadmill next to my husband (Ice) I looked over to see my daughter in tears and very distraught.  She approached him very upset and looking for his help. He left with her.  I assumed she was fighting with her brother on the basketball court and continued running. After a couple of minutes I decided to shut off my machine and go see what was up.

Turns out my son was not the culprit today, it was another boy she was guarding (or trying to) in what was supposed to be a friendly game of basketball among children.

According to her account, the boy was aggressive and rude the entire game towards her, he slapped her at one point, pushed her down and told her “You’re a girl, you can’t guard me!” 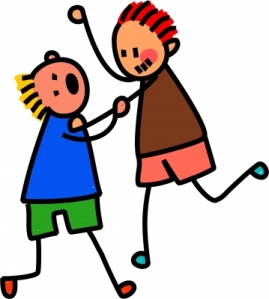 Step One: Find the Boy.

We set off to find this young man. Calmly and purposefully. When he saw Ice he started to bolt in the other direction with his little sister. Ice asked him to stop and follow him to the front of the gym.

Step Two: Ask for assistance from the staff.

Ice asked for the help of the man behind the front desk in resolving the issue.

Step Three: Give our daughter a chance to tell her side of the story and look this child in the eye.

We let her speak and then asked the other child if what she re-told was what he thought happened. Was it easy for her? Not at all.  But it was so important for her to stand up for herself with our support and encouragement. She had been really shaken up until this point and rather than be the victim I felt it was so important for her to gain back her composure and some of her control of the situation.

Step Four: Arrive at the truth.

When the boy denied the events happening or his involvement in them my husband told him the best thing to do was to tell the truth otherwise we would be waiting for the staff to find his parents and get them involved.  He re-considered his position and agreed that he had been physical with her and abusive with his words. We asked if there was anything else he wanted to say and he apologized.

Our daughter looked him in the eye and hard as it was I could tell she really meant what she said when she accepted his apology.

Ice told him not to pick on others. “Girls can do anything boys can do”, he said. “And if you were my son, I would want to tell you it’s never a good idea to run from your problems because they only double in size.”

Step Seven: Close the loop with the staff.

Ice approached the front desk to let them know the entire turn of events and provide our name and number for the child’s parents to get in touch with us if they wanted to discuss anything.

So far we have not heard anything. But I do hope that this child really stopped, whether then or later in the day, to let it sink in that what he did was wrong.

There are so many other ways that this turn of events could have been handled.  But I feel so much more at peace with how it was handled. Calm, firm, up-front, transparent.

Not every situation can be so cut and dry. Circumstances can be so much more serious, less controlled, lacking any adult supervision in the vicinity and on and on…  But when I asked my daughter to recount for me what happened today, she had a better handle on it than I did.  I actually consulted her before sitting down to put this to words.  She truly was impacted by what happened and walked away stronger for it.

I am so proud of her and my husband.