For the last several years I have selected a word or phrase of intention for the year. Kind of like a theme.  A beacon to guide my handling of life and to give some perspective.  I can’t recall exactly when I was introduced to this idea. But it was an author whose books were popular among friends of mine several years ago. I thought “Why not? What could it hurt?”

Some of my past examples?

This year’s catalyst for my word? Another book found its way into my hands at just the perfect time.
Forgiveness.

And it has made all the difference.

Forgiveness is hard. Perhaps that is why it is underrated. You and I find forgiveness hard because we are stubborn. Rather than stepping out to healing, we often prefer to sit and feed off our wounds because they are familiar and comfortable.  It is easier to do nothing. Maybe we struggle with forgiveness because we are lazy or because we are afraid.  But understand this: Forgiveness will transform you and your relationships once you release its power into your life. You will find a new and higher level of living and of relationships. Forgiveness is the most powerful word in the English language.

~Allen R. Hunt Everybody Needs to Forgive Somebody

We can all think of someone -be it a neighbor, co-worker, friend or family member- who is a grudge holder. I know I can. I have some grudge holding in my genetic makeup.

Sadly, there are some past hurts that just won’t be set free in my extended family. And the ripple effect of these decisions far outweighs the original intent in my mind. Hurt begets hurt begets hurt.  Enough.

Forgiveness has more clearly set my relationships right with Ice and my children. With my family and my friends. With co-workers and with the kid at the drive-thru window who didn’t greet me before announcing my total with a grunt and just his hand out.  As I type these words I can think of an example where this mantra this year has served its intended purpose. And I am so grateful for it.

Speaking of the drive thru…

Recently Ice shared one of his experiences. He pulled into a fast food place at the back of their parking lot. The cars were already lined up. The angle he was accessing the line made it so he had to wait for the last car to pull up a little for his vehicle to file in. But it was clear to anyone watching that he was “next” in line inching in behind the last car.

As luck would have it a pick-up truck pulled in through the drive thru circle and made sure he left no room for Ice to inch his way in. Even though it was clear Ice had been there waiting first.  The driver of the truck made sure to signal with some choice gestures and set the tone.

So this is how it’s gonna be. You know you’ve been there. Whatever it was that caused that feeling of indignation, anger or dare I say, revenge.

There are several ways this could have gone. It was just the degree to which the situation could have escalated that I was concerned about as he was sharing this with me. But I did not see this coming…

He approached the loud-speaker to place his order. After placing the order he asked the employee if he could pay for the driver of the truck’s order! And watching ahead at the driver, he could tell there was some kind of exchange going on between the driver and the employee.  Over the loud-speaker the employee hesitated in their response to Ice’s request.  As I am hearing this I am thinking, what is the hesitation? The driver wouldn’t let him pay?? No, not that at all. Would you believe the driver had already paid for Ice’s order?! Yep, did not see that coming.

This is just one amazing example that the power of forgiveness has to heal and repair.  The fact that both men were willing to extend this gift was awesome. And the beauty of it is, when given to others it really helps us free ourselves. Hanging on to hurts and wrongs against us gets heavy and burdensome. Why be bogged down with such baggage?

As I have been exercising my forgiveness muscles this year, it finally dawned on me, what about the forgiveness we deny ourselves?  What burdens do we hang on to that add to the load we carry?

I can’t lose the weight.

I don’t measure up.

I failed to reach the goal.

It brought to mind a situation I found myself in several years back.  Long story made short a misunderstanding occurred that created a very awkward situation for some friends. I found myself in the middle and made a couple of choices I now regret.  Feelings were hurt. Apologies were made repeatedly. Attempts to explain what had transpired were offered. But in the end, the choice to accept these attempts was denied and I have held the burden ever since.

Over time when I encounter the individual most offended it’s uncomfortable and awkward all over again.  But after time and space it’s clear to me I didn’t believe I could just choose to let go. Forgive myself.  I didn’t realize the problem wasn’t with her.  It was with me.  What else can I do? I made every effort to set it right. The sad part is she still holds her burden and the key to set it down and move on.

I so want my children to be able to adopt this way of living as they grow older. It will make their journey through life so much more enjoyable and fulfilling.  And kids always have a wonderful way of demonstrating forgiveness. One minute could be a huge teenage drama and the next it’s I’m sorry and on to what’s for dinner? I love that.

There is almost no greater gift we can give ourselves than to forgive. It’s a fresh start. A new beginning. It paves the way for more good stuff to get in and also be given out. It clears the clouds and allows the sun to shine. 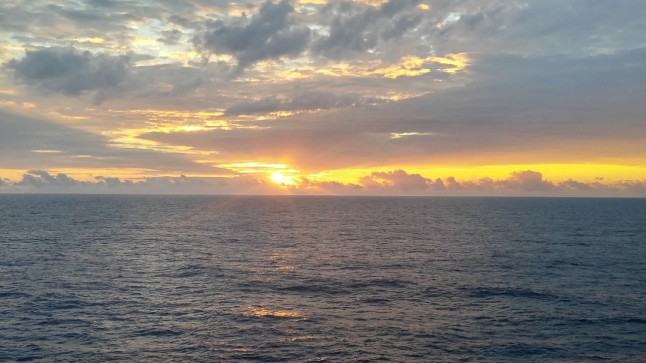 7 thoughts on “The Most Powerful Word in the English Language”